I’ve noticed that when I start making something, it starts out as a simple idea. As I get close to nearing completion of it, my mind wanders with all of the features I could possibly add to it. I begin working on all of those features at once rather than finishing the original “simple idea” first.

Getting stuck in the tunnel

Usually what will happen next is the codebase will get big and complicated quickly and I’ll start to lose control of it. A bunch of bugs turn up, and I eventually lose interest in fixing all of them. So I move on to the next “simple idea”. And the cycle continues. 90% completed projects full of bugs with no plans to release.

How to get out

There’s really no problem with this if you don't care about launching. It’s an awesome way to quickly learn a ton about programming. The more terrible code you write the more it starts to make sense where and how to improve it. Suddenly it makes sense why OOP is good for example, and how to organize better next time.

But it's a problem if you want to actually ship something. If you want people to use the thing you made, make money, or make a difference, then you need to find your way out.

I just realized I’m going through this right now with GhostiFi! It crept up on me slowly over the last month and now it’s starting to get pretty bad.

Luckily I just corrected it today before it got out of control. I decided I’m going to scale back my big vision (its been getting bigger every day since I started working on GhostiFi) and get back to basics.

Here’s how it happened to me:

I'm taking GhostiFi back to that first bold item.

I’m getting rid of the 3 plans, all the extra features, and I’m launching that 1 bullet point.

Only after I’ve launched, and started to gain some traction I will think about working on those points below bullet #1. Those will be individual feature releases.

From people I’ve talked to and what I’ve read, I’m not the only one with this problem. As a technical founder, my passion is technology first and business second.

I’m actually perfectly content iterating through all these ideas in my head, turning them into half-baked piles of code, and moving on without ever releasing.

I love working on my projects and bringing my ideas to life even if they never make a dollar or earn me any kind of recognition. But it is also a great feeling when you’ve made something that other people actually use and enjoy.

The only way to get there is to get organized, stay focused, and launch small.

Some stats after a month working on GhostiFi:

I started HostiFi, a Ubiquiti cloud hosting service, 1 year ago this month. Since then, it has grown from 0 to $5,735 monthly recurring revenue. 266 paying subscribers are 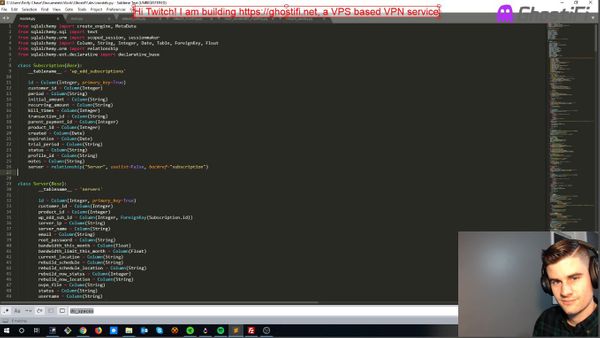 I finished writing the entire backend of GhostiFi with only 863 lines of Python. I’m really pushing to launch by December 9, which will be 1 month since I