It took around 3 weeks after launch for my UniFi controller hosting service, https://hostifi.net to get from 0–11 customers, and in this post I’ll be sharing what I did during that time to find those first customers.

When starting a new business, getting your first 10 customers is super hard. If you can do it though, it’s a huge milestone. It means that you’re much more likely to be able to get to 100.

If you have 10 customers, you’ve probably done at least something right. Your product or service has proven it has potential to create value, and you’ve found at least one method of customer acquisition that is working.

There are many reasons why it’s so hard to get to 10. When you’re at 0, you don’t have any testimonials or positive reviews. You have no brand reputation, and because of that it is really hard to earn trust.

If that wasn’t bad enough, you also more than likely don’t have any idea how to get customers. Any ideas you do have are unproven so far.

When you built your product or service, you thought that you knew exactly what your customer needed, but because you haven’t had any customers yet, you’ll probably realize later that the requirements will change based on feedback.

You might even find out that the type of customer you thought would need your product doesn’t need it at all, and your actual customer profile is completely different than what you were expecting. That's what happened to me!

Typically when you start a business, your first few customers are your friends or family. As you do good work, improve your product or service, and get some positive reviews, it becomes easier to work your way out to the friends of friends and casual acquaintance zone. Eventually customers start to come in from referrals, and then one day you’ve got customers coming to you who you have no relation to, thanks to your brand awareness efforts.

Unfortunately, this traditional model was not possible for HostiFi. The problem was, I didn’t know a single person who needed UniFi controller hosting! That made getting those initial customers even harder.

Luckily, I had read Tyler Tringas’s Micro-SaaS ebook which had lots of helpful ideas on getting started: https://tylertringas.com/chapter-5-getting-your-first-customers/

Between that, listening to Omer Kahn’s SaaS Podcast, reading about SaaS success stories on Indie Hackers, and others, I had an idea of what I needed to do. I was going to start by finding places on the internet where my potential customers congregate and begin reaching out to them.

This is what Google Analytics looked like for the web traffic during the time period which the first 11 customers signed up.

The traffic from the first spike was mainly driven by my Tweet about launching HostiFi:

At first, I tried several ways of getting the word out about HostiFi. Most of them were complete failures.

Didn't work. On launch day (May 24), I created an Upwork profile for HostiFi. This didn’t bring in a single lead to date. It’s not a bad idea though, and might work if I put a bit more time into building the profile up with small Ubiquiti jobs to get a higher ranking within the site. The idea is to find customers who are looking to pay for someone to do what your product does, and then recommend your product to them. I think the reason I gave up quickly on this was because I was seeing a very low volume for Ubiquiti related job postings.

Didn't work. See where it says 15 impressions? That’s how many people might have looked at that post. Not on that day. That’s 15 impressions total for May through October. Using LinkedIn to find Ubiquiti users wasn’t going to work. Although LinkedIn has hashtags and groups where Ubiquiti users can be found, company pages can’t engage with other people’s posts. A company page also can’t “connect” with anyone. It’s a one way street where users can interact with a company, but a company can’t interact with users.

Didn't work. This one still really, really bums me out. The Ubiquiti SubReddit has an incredible 22.4k subscribers, certainly one of the biggest congregation of Ubiquiti users on the internet. On May 25 (day after launch), I created an account for HostiFi and sheepishly asked “What do you guys think of https://hostifi.net?" Almost immediately my post was deleted and I was reprimanded by the mods. I argued that the content I posted wasn’t spammy and was useful to the community, but they weren’t buying it.

Sort of worked. This one was a big disappointment. On launch day, and for the first week after launch, I reached out to dozens of Ubiquiti users in a forum. I was asking for their feedback on HostiFi. Only 6 people replied. None were interested.

I listed this as a "sort of worked", because although private messaging didn't work, making non-spammy posts on the forum by helping answer questions about UniFi for people proved to be a big success in driving traffic to the site and getting customers.

Success! I created a Twitter account for HostiFi pre-launch, on May 16, 2018. I spent that month following #Ubiquiti and #UniFi. I mainly retweeted, liked, and followed users who were posting there.

Above is a screenshot of HostiFi’s Twitter Analytics in May 2018.

And above is HostiFi’s Twitter Analytics for June. As you can see, there was a major improvement in followers, impressions, and profile visits, all which were helping drive traffic to the site early on.

Twitter was the first place that I felt I was getting some traction. Unlike LinkedIn, I was able to directly interact with other users. I could find my people using hashtags, and engage in discussions with them openly. And unlike Reddit and the Ubiquiti Forums, I wasn’t at risk of being shutdown by mods.

Most of the initial marketing attempts that I did were completely new to me. I’ve been working full-time in IT my entire career. I’ve never had much experience in sales, marketing, or building a brand.

It wasn’t that hard though. The concept is pretty simple. Ideally, if you’ve created a product, you’ve made it with a certain group of people in mind. Where can you find those people on the internet, or in person? Direct your efforts in those places where your ideal customers congregate.

After the first 10, it’s important to start developing more scalable marketing approaches. Some I have been trying out since then are creating content, YouTube videos, paid advertising on Google, Facebook, Twitter, and LinkedIn, and referral commissions — I’ve been sending out $15 Amazon gift cards each time one of my customers refers a friend who signs up. 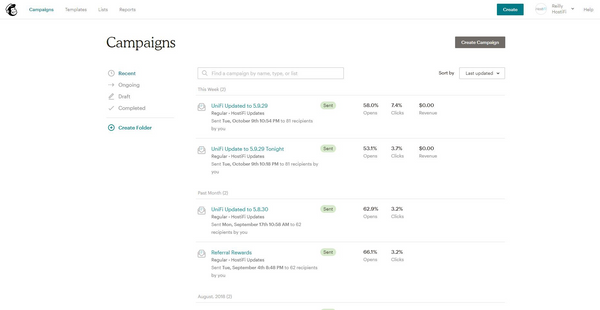 In this post I discuss 20 different marketing tools that I’ve been using to get the word out about my UniFi controller hosting platform, https://hostifi.net, which, in

Many hours of research, trial and error went into choosing the tech platforms that now make the foundation our service offering. In 2018, it has never been easier to start